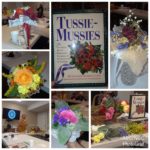 On Sept 26, 2018, the Norcross Garden Club had the pleasure of attending the Indian Creek Garden Club meeting to enjoy  a program with their very own Geri Laufer author of Tussie-Mussies: The Victorian Art of Expressing Yourself in the Language of Flowers. The term tussie-mussie (also tussy-mussy) comes from the reign of Queen Victoria (1837–1901), when the small bouquets became a popular fashion accessory. They include floral symbolism from the language of flowers and include a message to the recipient detailing the meaning of each chosen flower.  We all anxiously awaited Geri’s step-by-step demo as she gave an interesting history of flowers and fashion during the Victorian era. It was fascinating to learn about the rich history of giving and carrying flowers. In those days flowers could convey any and every emotion from everlasting love to I never want to see you again! Geri has created a simple and elegant way to carry them using gloves, lace and ribbon, check out her article in Flower Magazine for a tutorial . She also brought stunning examples of ornate and elaborate holders. What I loved was the incorporation of herbs and even nuts! In my humble opinion, smelling herbs and flowers together makes the soul sing. Here’s a few flower and herb meanings:

In those times entire dictionaries were dedicated to flower meanings. Geri is a great historian and explained to us that in Victorian times women were expected to be able to arrange tussie mussies and one way for a woman to make her own money was to write books about flowers and such. Many of the books Geri studied  in the creation of her own book were written by Victorian women.

Corsages and boutonnieres give way to modern day tussie mussies or nosegays as they are also known as. In fact, the word tussie mussie derives from Turkey. The Turkish language and their affection from rhyming. I too have a soft spot for rhyming. I came very close to naming my daughter Tenny Penny! In the book you will see many of Geri’s family heirlooms and family photos. It was a pleasure hearing the rich evolution of flower carrying and wearing. Watching Geri beautifully arrange a tussie mussie. Not to mention Geri’s love and depth of knowledge comes through true and true.