The Norcross Garden Club, founded in 1931 [1],has worked over its 88 years in existence to promote beautification, conservation and education in the Norcross area. The club’s bylaws [2]state that its purpose is to:

In this article we look back at the history of the club, and that of its predecessor organization, the Norcross Civic Improvement Club.

The Norcross Civic Improvement Club was founded in 1916 with Mrs. T. E. (Eulalia, or “Lala”) Summerour as the first president, and for the next 40 years was dedicated to carrying out just what its name suggests – making Norcross a better place to live.  Mrs. Summerour is shown in the photo below. (photo 01). 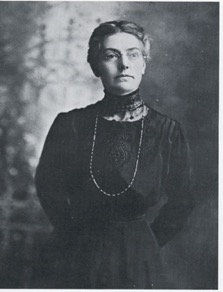 An article in the Lawrenceville News Herald in October 1917 [3]reviewed the club’s activities during its first year in existence.  At that point there were 59 members (all women) plus 32 honorary members (all men), organized into departments including civics, home economics, handicraft, health education, floral, music and drama.  Accomplishments during the first year were listed, including:

The club in its first years held its meetings in the homes of members or in local churches.  But in 1920 the club purchased a permanent home for their meetings from local physician Dr. W. Powell Walker.  [4]

Dr. Walker (1860-1929) had graduated from Southern Medical College in 1881 and practiced medicine in Atlanta for a number of years, then moved his family and practice to Norcross in 1906.  [5]Initially they lived near the intersection of West Peachtree and Autry Streets, but two years later they moved several blocks away, purchasing a home near the Methodist and Presbyterian churches. At that time he also purchased a lot adjacent to the Presbyterian Church, near his new home.  And he quickly filled up the lot – he had had a small building (thought to be used as a waiting room for his patients) near his previous home, and he brought that building over to the newly-purchased lot, using a pair of oxen.  This caused something of a stir among the locals – the Norcross News column in the News Heraldof that time reported

Dr. Walker is moving his office to his lot near the Presbyterian lot.  A house on wheels moving along the street is a show. [6]

After another dozen years Walker decided to move to south Florida[7],and as a result sold the lot (with the small building) to the Norcross Civic Improvement Club in 1920 for $850.00.  The building was described in a historic memoir by Amanda Gainer as follows:

The house had one room with a small addition, speculated to have housed supplies. There was a porch on one side, and inside benches lined the long walls. A big heater stood in the center of the room, and there was no bathroom. [8]

The Civic Improvement Club was very active in representing Norcross in the area.  They won the $1000.00 first prize in consecutive years, 1920 and 1921, for displays of “woman’s work“ at the Southeastern Fair in Atlanta.

(Note: according to the Atlanta History Center website, the Southeastern Fair was held annually from 1915 to 1975 at Lakewood Park in Atlanta, sponsored by the Chamber of Commerce. The fair, billed as Georgia's largest outdoor event, featured an amusement park, stock car races, beauty pageants, fireworks, live acts, and an exhibit hall promoting industry and agriculture.)

Over the years the minutes of the Civic Club record programs on various topics, including honoring local grandmothers and promoting civil defense. The 1926 Grandmothers Day program featured segments by local ladies Ida Wootten and Dora Kiser Webster, among others. [10]  Ida Wootten was renowned locally as a teacher of music and elocution, and her students presented a musical version of “Mother Goose” for the grandmothers.  Miss Wootten is shown in the photo below. (photo 02) 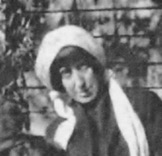 Dora Webster, whose family lived in a home on North Peachtree Street in Norcross for a century [11], spoke of the importance of education, focusing on the Tallulah Falls School in North Georgia. She is shown in the photo below. (photo 03) 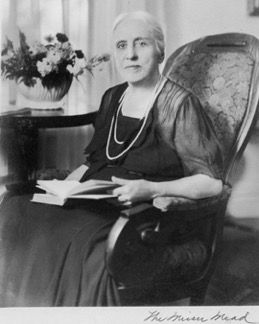 Over the years the club made its meeting space available for other activities, including scout meetings, music lessons and performances and dance lessons.  And the club took on construction projects, including adding stone columns at the entrances to the park in the center of Norcross (a project completed in 1926 - see the photos below – photos 04 and 05), and in 1930 upgrading their clubhouse to include indoor plumbing, a kitchen and a fireplace.  (When the latter project was complete they invited the Lawrenceville Kiwanis Club to come to Norcross for a joint meeting and supper to celebrate the improvements to the clubhouse. [12]) 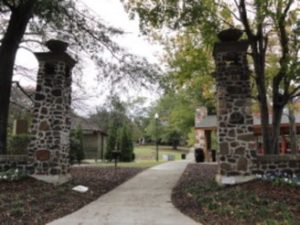 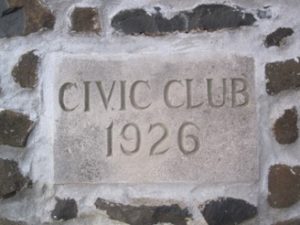 The Civic Club was quite active in gardening activities too – members made plantings to beautify the town, adding and maintaining flower boxes at the railroad depot as well as flower beds in Thrasher Park.  The club also sponsored flower shows, including a large one in October 1930 that received a pictorial spread on the front of the woman’s section of the Sunday Atlanta Journalnewspaper (with many of the club members shown along with the winning flower arrangements.)  [13]

Newspaper accounts report that the Norcross Garden Club was founded in the early spring of 1931, with Mrs. B. F. (Grayde) Summerour as President. [14]  Membership records show a substantial overlap between the two clubs.  Why a separate club?  Available documentation does not address this, but perhaps there was a desire at that point to create a club that would have a singular focus on gardening, rather than the more broad range of activities carried out by the Civic Improvement Club?  In the spring of 1932 the Norcross Garden Club became an affiliate of the Garden Club of Georgia [15], which unites local garden clubs from across the state.

Early program topics at garden club meetings included discussions of types of soil found locally, common pests in local gardens and how to destroy them, color combinations and flower arrangements.  Meetings also included choral music and poetry, and the group made plans to attend flower shows and related events in the area. [16]

Mrs. H. L (Laura Wilson) Sudderth was the Recording Secretary in the early days of the garden club [17],and she preserved the minutes and other documentation from early club meetings.  Her photo is shown below. (photo 06) 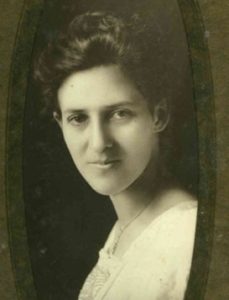 One of the meetings in the spring of 1932 was at the home of Mrs. Eva Letson in downtown Norcross, [18]She took the club members through her rock garden, which featured more than 40 varieties of plants.  Mrs. Letson is shown in the photo below (photo 07), with (left to right) her sons Sam, Quill and Johnson, and in front her grandchildren Shirley, Nancy and Sam Jr..  The photo was likely taken in 1943, when two of her sons were already in the service in World War II.  The son in the navy uniform, Quill, was one of five young men from Norcross who did not return from the war – he was lost when the minesweeper on which he served was sunk during the Normandy invasion in June 1944. [19] 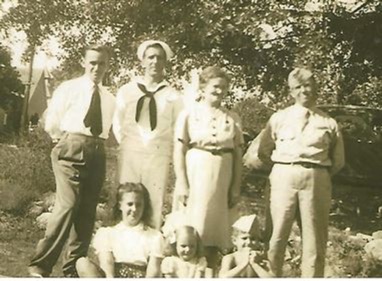 It appears that the Norcross Civic Improvement Club faded away in the 1950s, while the Garden Club increased its activity level and carried on, under the leadership at that time of Mrs. D. K. (Carrie) Maloney [20], a teacher at the local high school, shown in the photo below.  (photo 08) 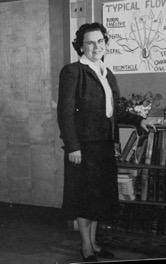 The garden club started to use the civic club clubhouse for its meetings in the 1950s, and in 1978 Lillian Webb, thought to be the last president of the Norcross Civic Improvement Club, signed a quit claim deed for the lot and building in favor of the Garden Club. [21] Since that time the Garden Club has made a series of enhancements to the building and grounds, including adding siding and providing a striking coat of yellow paint. (See photo below). (photo 09)

Garden Club members have been prominent in the community over the years.  Joyce Howington, a longtime club member, served three terms on the Norcross City Council.  She is shown on the left in the photo below (photo 10), along with Allene Richardson, who was Garden Club President for four years in the 1990s. [22] 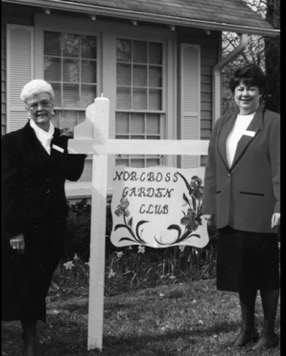 Garden club activities over its 88 years in existence have been varied.  There has been an annual springtime plant sale open to the public for many years, furthering the club’s goal of community beautification (see the photo below.) (photo 11) 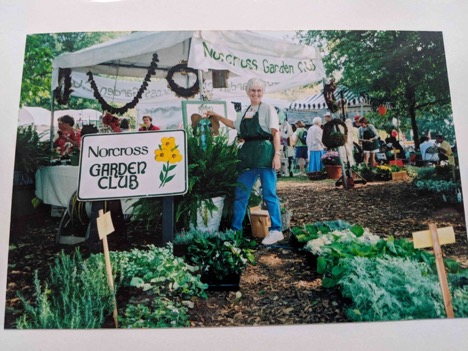 Arbor Day and Earth Day celebrations have featured planting trees in city parks, and in 2006 the club planted a “patriot tree” in Thrasher Park in honor of the men and women of the police and fire services that protect the community.  [23]

In 2007 the club was one of the sponsors, along with Gwinnett County Master Gardeners and Norcross Neighbors, of the Gardens Inside Gwinnett tour of private gardens in Suwanee, Duluth, Berkeley Lake, Peachtree Corners and Norcross.  Proceeds from this event benefited Summerour Middle School in Norcross.

In recent years the club has focused on education of the youth in the community, sponsoring

A number of members have pursued education through their participation in the Georgia Master Gardener Extension Volunteer program.    These volunteers assist the UGA Extension Service in providing unbiased horticultural information to the public through volunteer community service and consumer horticulture programming.  Earning the MGEV title requires a substantial commitment on the part of the participant – prior gardening knowledge is not required, but each MGEV must complete a 42 hour training course (with two exams) and then must provide over the next year a minimum of 50 hours of community service to the public. [24]

And the Garden Club makes sure that their members have some fun too, with luncheons and trips to flower shows and gardening showcases such as Gibbs Gardens in North Georgia.  (See photo below.) photo 12 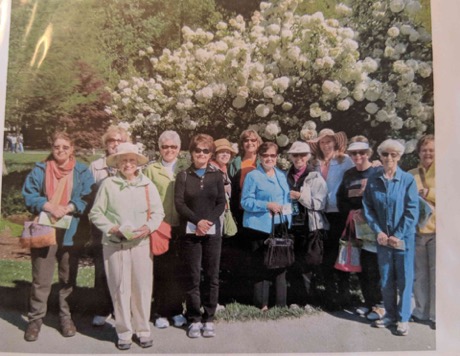 Thanks to many individuals for their help in putting together this article, especially Leanne Penman, Joe Johnson, Bruce Campbell and Betty Spruill.  The Norcross history book written by Martha Adams and Irene Crapo was also helpful, as were various websites, including Ancestry.com and Newspapers.com. 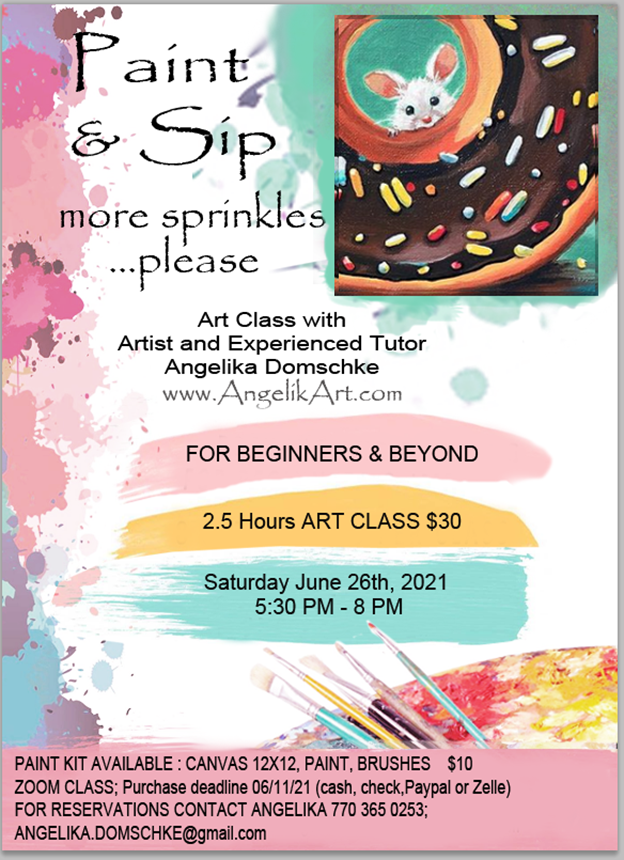