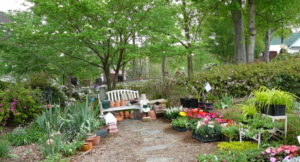 The College Street location has served as a community gathering place for some 100 years. In the early 1900’s a building formerly located on Autry Street was moved to this site, drawn by a pair of oxen. The building had served as the office of Dr. W.P. Walker, a general practitioner. The house had one room with a small addition, speculated to have housed supplies. There was a porch on one side and inside, benches lined the long walls. A big heater stood in the center of the room and there was no bathroom.

Soon after the building was moved it became a studio for Miss Ida Wooten. Miss Ida was a generous woman, a talented pianist, guitarist and vocalist. She shared her talents with the community and taught hundreds of students. In 1930 a new clubhouse was built by the Civic Improvement Club. It remains a question as to whether the building was totally rebuilt then or renovated by adding a kitchen, bathroom and fireplace. It continued to serve as Miss Wooten’s studio as well as a meeting place for the local Boy Scout troop and other civic organizations.

Since 1958 when the Norcross Garden Club was founded, its members have had the privilege of meeting in the clubhouse located at 33 College Street in historic Norcross. The club used this space owned by the Civic Improvements Club for 20 years before the transfer of ownership in 1978. In 1978 the Norcross Civic Improvement Club gifted the property by means of a quit-claim deed and $1 to the garden club. With that gift came the responsibility to maintain and improve the property as needs dictate.

And that's the story of where we reside now - but wait there's more from a recent donation of documents from the attic of a nearby home identifying:

Feb
4
Sat
2023
all-day NCG – Cottage Rental
NCG – Cottage Rental
Feb 4 all-day
Cottage rented.
Feb
14
Tue
2023
10:00 am Member Meeting – AM – And the wi... @ The Garden Cottage
Member Meeting – AM – And the wi... @ The Garden Cottage
Feb 14 @ 10:00 am – 12:00 pm
And the winner is… Growing Vegetables from Seed, presented by member and master gardener, Laurie Wakefield. Please RSVP to Debbie Boyd.
Feb
15
Wed
2023
all-day NGC Membership Dues – Deadline
NGC Membership Dues – Deadline
Feb 15 all-day
If you would like to be a member of or continue your membership, please send in your payment. Dues are $60 per member. Two household members may hold membership for a single payment of $70. Please contact Debbie Boyd by February 15th, of your membership intention. Your name will be removed from our club roster and the state membership roster if[...]
View Calendar
Add

We are proud members of the National Garden Club, Dogwood District of the Garden Club of Ga. & Deep South organizations.