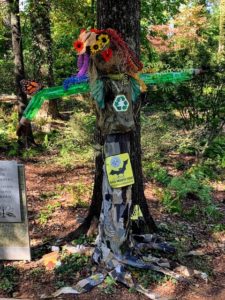 During the month of October, the Atlanta Botanical Garden (ABG) presented “Scarecrows in the Garden”, an exhibit created by local artists, crafters, youth groups and more. Wandering ABG's fall beauty, visitors enjoyed dozens of randomly placed sculptural creations that didn't adhere to a particular theme, other than they may or may not keep the crows away. Giant owls peeked around the skirts of elaborately dressed witches, while a few yards away a zombie violinist was seen emerging from his forest grave. Tucked amidst the fiery finery of autumn maples, a statuesque creature dubbed “The Garden Goddess” represented the Garden Club of Georgia (GCG) and invited passerby to check out their website. Formally titled “Nurture the Garden We Call Georgia” the scarecrow was created for GCG by members of the Norcross Garden Club (Dogwood District), who used recycled plastics and metals, clothing and fabric scraps and even swimming noodles to create this whimsical creature.

“We wanted a scarecrow that would illustrate GCG's slogan of 'Beautification, Conservation, Education' in a way that was fun and inviting. The result was this sweet ‘goddess’ made entirely from recycled items, or items from those 'project boxes” everyone seems to collect in their basement or garage,” explained NCG president Leanne Penman. 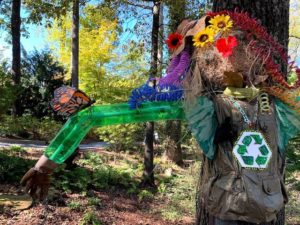 The goddess' trunk was assembled from a scrap of air conditioning duct firmly attached to a metal base intended to secure deck umbrellas. Club member Jolyn Barrow wrapped the duct with a quilt she cobbled from donated scraps of fabric and used last summer's swimming noodles to give the Goddess' “roots” a 3D appearance. Leanne and club members Tixie Fowler and Jill Swenson added a medallion of the recycling symbol made from old soda can pull tabs, and plastic liter bottles were repurposed into arms adorned with Monarchs and dragonflies made with dried up Magic Markers, painted fabrics scraps and bits of wire. According to Penman, engineering the goddess' arms and upper torso with plastic soda bottles was the biggest challenge, with creating the curls from old book binder coils running a close second.

“One of the rules was that your scarecrow couldn't weigh over 50 pounds and had to be easy for the ABG workers to install around the garden,” said Penman. “Considering none of us had 'scarecrow engineering' on our resume, we're pretty pleased how she turned our, but we definitely have ideas on how to improve upon next year's entry.”

The Garden Goddess has already succeeded in garnering the Norcross club two new members, a couple of newly arrived residents who were walking by and stopped to admire the creative process. According to Penman, their attention was caught by the laughter of the 4 members who quickly solicited advice from the visitors on how to secure an old gardening hat over the goddess’ mass of springy curls. Not only did the camaraderie inspire the two to join the club right then and there, they also signed up for next year's Scarecrow Committee.

“The Goddess was working her magic and her head wasn't even attached yet,” laughs Penman. “Hopefully she'll inspire people visiting the exhibit to look up the GCG website and join a club in their own neck of the woods.”

The members agreed that it's projects like this that bring gardeners together to teach and learn, to celebrate Nature's beauty and to be good environmental stewards. And while the goddess is far from perfect she is definitely joyful, and like garden clubs all over Georgia she is welcoming...even to crows.